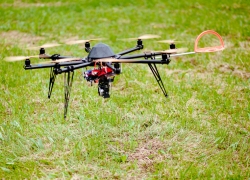 Remote-controlled aircraft began their era at the beginning of the twentieth century. The unmanned aerial vehicles or unmanned aircraft systems that we now call drones are used in many areas of life, from military aviation to farm work.

Researchers at Aleksandras Stulginskis University (ASU) in conjunction with the Independent Timber Scaling Association of Lithuania (LNMMA) created 3D object volume determination technology based on aerial photography obtained using a drone helicopter. In order to improve timber accounting methods the technology began to be developed through the daily activities used at LNMMA assessing woodpiles and stacks of chips or peat volume.

The German “Wildlife Finder” project (Wildretter) financed by the German Ministry of Agriculture is designed to find young reindeer hiding in the grass and protect them from injury while machinery is at work, such as while mowing. According to project representative Rolf Stockum, about 100,000 juvenile reindeer are killed that way annually, so this pilot project is aimed at finding out the advantages of the new technology. Using aerial photographs obtained from unmanned aircraft infrared cameras, machinery operators are warned about the risks of injury to the animals.

The Kenyan Wildlife Service in cooperation with the police, Interpol, and the Ugandan and Tanzanian governments is preparing to deploy such aircraft in all 52 of their national parks and reserves in order to control and stop elephant and rhino poaching. Since 2012, 435 elephants and 400 rhinoceroses have been lost to illegal wildlife product sales in Asia and elsewhere. Kenya has taken to innovative solutions: a pilot project proved worthy and poaching has decreased by as much as 96% because poachers were observed long before they managed to make a kill.

China has had a decade of unsuccessful fighting against air pollution from factories and unmanned aircraft are set to collect data on air pollution in the north. Over 1,000 square kilometres were surveyed between 16 and 27 June 2014. Hopefully the data will make it possible to fight pollution more effectively and punish scofflaw polluters.

The geese flying over Ottawa, capital of Canada, create terrible discomfort for beach goers by contaminating the water with their faeces, which is full of infectious E. coli bacteria. A noisy helicopter drone can come to the rescue by scaring the birds away from the popular beach spots.

However, as the prices of drones continue to drop the risk of privacy violations increases. Although in the previously mentioned situations unmanned aircraft are used in remote locations, often amateurs use such devices to take pictures or record video of not only beautiful landscapes but also places where people gather. Because the airspace at high altitudes is not fully controlled there is a risk the aircraft can violate people’s privacy. The USA and Great Britain have prepared legislation to establish rules concerning the use of drones, including a section regarding people’s privacy.